Over the coming weeks, we will be highlighting each one of the Community Design Advocates, whose goal it is to broaden and deepen this project’s connection and responsiveness to the various communities it serves. Each story will detail this important work to better understand why they are involved in this project, what they hope the messages they’re hearing will mean for the site and to get to know them all a little better. This week we highlight Tiara Cooper. 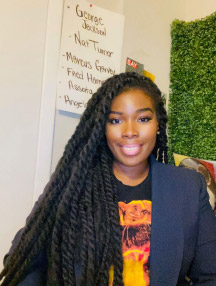 Q. Tell us a little bit about your background, what were you doing prior to joining Trinity Park Conservancy?

A. I am a community organizer for those who are directly impacted, or formerly incarcerated. Before I joined the Conservancy I was kicking off a listening campaign and preparing for a legislative session.

Q. What sparked your interest in getting involved with the Conservancy?

A. I myself was convicted of a State jail felony at the age of 19 in 2013. I was sentenced to 2 years of which I only had to serve 1. It was because of an organizer and activist that the Dawson jail had shut down. I heard the terrible stories, but I never had to spend one day there. Those women I was locked up with trusted me with their stories and we built a community. I knew I wanted to be a part of the transformation for them, myself and the future women who would never have to encounter such a public health crisis. I advocate for design justice and the disinvestment in prison and policing in Dallas so this opportunity aligned with my personal passions. Formerly incarcerated people have a seat at the table, and a voice!

Q. What does 106 W Commerce mean to you? What would you like the building to represent in the future?

A. It means Violence to me. Dawson State Jail was a place where violence perpetuated in ways we will never fully know in detail. Many system impacted individuals didn’t survive the mass incarceration system and these were people with the lowest level of felony, often drug offenses, forgery, and theft – and I was one of them. The criminal punishment system is and has always been a public health crisis and threat. I am proud to know that this jail will now be transformed into something that acknowledges what happened and promotes a thriving community!

Q. How has activism or advocacy influenced your work or your personal life?

A. It was activism that helped me find my voice and organizing that allowed me to find my people. To actually create a movement that can bring about a change. My goal is to set the captives free- and sometimes that’s quite literally but mostly mental, and communal.

Q. How would you encourage others to challenge current systems of injustice? Or advocate for causes they care about?

A. I would encourage people to lean into the WHY more. Our criminal legal system only addresses symptoms of larger issues and plagues. We need to get down to the bottom of it! Listen to those most directly affected because they have experience and encounter.

What are some major misconceptions about formerly incarcerated individuals you would like to address?

A. I would dispel the myth that we are violent and aren’t worthy of a life of dignity.

Q. What are some barriers after release some people don’t consider or even think about?

A. The #1 barrier is that prisons and jails don’t do what people believe they do! They don’t correct, or rehabilitate. When you re-enter society people expect you to magically thrive because you’ve been “Corrected…you’ve been given a “ Second chance.” No – we’ve been given an opportunity to FAIL, when you know you have a label, a track record, surveillance, that prevents you from a livable wage, job, housing, benefits, and in many ways community. Once we divorce the idea of what prisons offer we can address the whirlwind of barriers that come with being incarcerated.