Over the coming weeks, we will be highlighting each one of the Community Design Advocates, whose goal it is to broaden and deepen this project’s connection and responsiveness to the various communities it serves.

Over the coming weeks, we will be highlighting each one of the Community Design Advocates, whose goal it is to broaden and deepen this project’s connection and responsiveness to the various communities it serves. Each story will detail this important work to better understand why they are involved in this project, what they hope the messages they’re hearing will mean for the site and to get to know them all a little better. This week we highlight Richard “Chico” Smith. 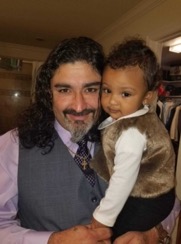 Chico and his daughter

Q. Tell us a little bit about your background, what were you doing prior to joining Trinity Park Conservancy?

A. Currently, I’m the Program Director for Trinity Restoration Ministries and we mentor men who were formerly incarcerated. We help men with job placement. I also own a fencing company, I employ 60 percent of men who have been affected by incarceration as I have been.

Q. What sparked your interest in getting involved with the Conservancy?

A. Being locked up at Dawson State Jail and seeing the building being used for a different purpose.

A. Enjoying the restaurants at the Trinity Groves

A. It means redemption.

Q. What would you like the building to represent in the future?

A. I would like the building to represent a change in the way society looks, deals with and interacts with those who were formerly incarcerated.

Q. What does design justice mean to you?

A. It means designing something to right the wrongs of the past.

Q. How can the Conservancy utilize design justice practices with 106 W Commerce?

A. To see how the future of building would better serve the community instead of its former use for incarceration. It wasn’t a real jail. It was grossly negligent.

Q. How has activism or advocacy influenced your work or your personal life?

Q. How would you encourage others to challenge current systems of injustice? Or advocate for causes they care about?

A. I would say reinvesting in a different system or society would be more beneficial.

Q. What are some major misconceptions about formerly incarcerated individuals you would like to address?

A. That they will never be anything different than what they were.

Q. What are some barriers after release some people don’t consider or even think about?

A. Housing, clothing, transportation, employment. Really a secure and safe place to live.

Q. What kind of impact do you hope the future of building will have on the City and on Harold Simmons Park?

Some of Richard’s Dallas Favorites